Dabang Delhi is the kabaddi team of Delhi founded in 2014. DoIT Sports Management (India) Private Limited is the owner of this kabaddi team. Honnappa C. Gowda is the team coach and Thyagaraj Sports Complex, Delhi is the home ground for Delhi boys. Let’s see how these guys perform in Pro Kabaddi 2018.
2015 definitely didn’t belong to Dabang Delhi. They were at the bottom second and couldn’t get the champions title which they were aiming for. They failed very badly and didn’t even reach semi-finals. But looks like they have trained pretty well right now and they feel like they can bring back the lost glory of Dabang Delhi. Lets ee how they manage and pull it off this time. 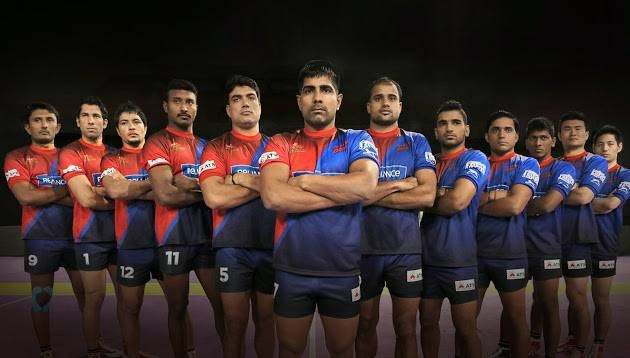 On the previous season, Dabang Delhi won only 9 matches out of 28 matches. But their tackles did go well. The raid percentage was great too. But looks like the wind didn;t blow in their reign and they are now looking bold to attack strongly and aggressively. In PKL 2018, Dabang Delhi is treated as underdogs and dark horses, They placed their bets on this game turner. Will Dabang Delhi reach up to our expectations? Let’s wait and see.

At the moment, Dabang Delhi is not at all worried of Pro Kabaddi 2018 champions title. They are just waiting to make a good start with their first match. They want to keep the morale high. With this, Dabang Delhi can surely strike back what they lost in the previous season
.